In 1969, a number of movements were converging in Laguna Beach. Counterculture messiah and LSD advocate Timothy Leary drifted through town occasionally, and it was not difficult to purchase psychedelic drugs on the street. Women’s Lib had succeeded and “ban the bra” was in full effect. On the religious front, the Hare Krishnas had established a temple in downtown Laguna. They could be seen, with their shaven heads and flowing pastel robes, chanting up and down the streets each day. In 1970, The Happening, a three-day music festival that rivaled Woodstock, was held in Laguna Canyon. 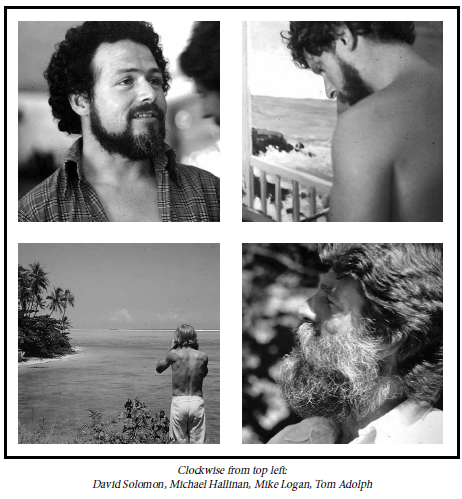 This scene was altogether different from the early 1920’s when Laguna Beach became established as an art colony. Painters William Wendt, Edgar Payne and Frank Cuprien were part of the plein air movement that sought to capture the area’s beautiful color and clear light on canvas. The movement started by artists in the early 20th century had waned by 1960, a time when abstract subjects prevailed. In 1970 a new group of painters arrived in town. Of varying backgrounds and experiences, each one made his way to the small seaside village. Gradually they found each other and collectively formed a new generation of landscape painters who fell in love with painting outdoors.

Between 1970 and 1980, David Solomon and his circle of friends dedicated themselves to their craft and succeeded in becoming “selfmade” artists. They took the risk of pursuing fine art full time, instead of getting real jobs. They did not have trust funds to fall back on. They painted for the love of painting, and followed their passion to live the artist’s lifestyle of traveling, painting, and exhibiting their work.

Each charged forward with a new approach to an old tradition. These aspiring artists were inspired by the masters of early California who painted outdoors, yet they did not seek to simply copy the style of their predecessors. They reinvented the wheel to communicate their own impressions of the landscape, and they learned by doing. There were no “plein air” classes to take, so they taught themselves, figuring it all out along the way. Solomon was the only one who chose watercolor over the traditional medium of oil.

In addition to their dedication and talent, other factors worked in their favor. Housing prices in Laguna were low and within reach of single-income households. Apartments by the beach rented for around $200 a month. The mortgage payment on a new family home would have been $400. Selling just a painting or two each month could pay the bills. Additionally, the town seemed insulated from the problems facing the rest of the country. 1970 was the most inflationary year since the Korean war, and unemployment was high, yet Laguna Beach seemed somehow insulated from the world’s problems. Locals still enjoyed a laid back sense of optimism, and more importantly, people were buying art – sometimes as fast as the artists could paint it. This situation would start to change by the mid-1980’s and the window of opportunity would slowly shrink. Until then, the conditions were ideal for a renaissance.

In the span of one decade, these painters transformed themselves from novices to local legends in the art community. Among them, David Solomon emerged as one of the most highly regarded watercolorists of his time. 50 years later he is still painting. His work has won countless awards and is included in prestigious art collections around the world, yet his stated goal has always been to simply “enjoy life as an artist.” This is the story of his journey over the past 50 years and how it all began.